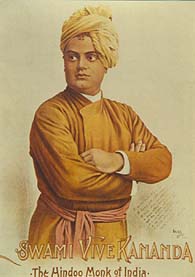 This illustrious patriot-saint of modern India was born in Calcutta on 12 January, 1863. He was named Narendra. His father, Viswanath Datta, was a brilliant lawyer. He was highly respected for his intelligence and culture. His mother, Devi Bhuvaneshwari, was a devout woman with a great ability for training her children. As a boy, Narendra was very naughty and self-willed, and often had to be placed under a water tap to curb his mischief. Nevertheless, he was very generous, loving and devoted, with a strange attraction for wandering Sadhus. He enjoyed doing worship of Lord Rama and Lord Krishna with his mother.

After his matriculation, Narendra went to college. He was rarely absent from social parties. He was the "soul of social circles" and no gathering was deemed complete without his presence.

One day, his neighbour received a surprise visit from the saint of Dakshineshwar, Sri Ramakrishna. Narendra was also invited to sing devotional songs. As he sang, he sent thrill after thrill through Sri Ramakrishna until the saint fell into a state of ecstasy. When he became normal again, he made Narendra sit beside him and enquired lovingly of the boy. With time their friendship grew.

The death of his father forced Narendra to find work and support the family. During these years of great struggle, his sheet anchor was his Guru, Sri Ramakrishna. Narendra yearned intensely for God and began to plague the Master for realisation.

Narendra, now known as Swami Vivekananda, founded an Ashram near Calcutta, in order to organise better the Master's mission. This was the beginning of the Ramakrishna Mission.

From 1888 to 1890 Swami Vivekananda travelled widely. He went on a pilgrimage all over the country, studying the conditions of the people. Wherever he went, his magnetic personality created a great impression.

In 1893, Swami Vivekananda went to America to attend the World Parliament of Religions in Chicago. His powerful speech at the opening session of the Parliament brought him instant fame and acclaimed him as a great orator and the most ideal interpreter of India's wisdom. He instantly became very popular in America.

Swami Vivekananda's powerful personality and his passionate call of service of the poor, is still influencing people all over India and the world.

Swami Vivekananda arrived in America penniless and depending only on God's Grace. After the Parliament he began to receive the homage and hospitality of all America. He lectured at all the important centres. As a true Sannyasin he refused to sell religion for the sake of amassing money. He preached the gospel of unity of faiths and scattered the seeds of purity, knowledge and faith. After his stay of two years in America he toured England and Europe for three months.

The tremendous ovation he received on his return to India in no way took his mind away from his mission of bringing religion to the doors of the poorest. His aim was to awaken the masses by reviving Vedic religion, and to clean it of the dross and impurity that had clung to it for so many centuries.

In 1902 Swami Vivekananda entered Mahasamadhi. Six years of discipleship under Sri Ramakrishna had taken him to the realms of God-vision. Seven years of travelling in India had broadened his outlook on life. Nine years of a national and international career were all that were left for him; yet, how filled with glorious work those nine years were!

Swami Vivekananda's gospel was one of hope, faith and strength. He never succumbed to despair, for he knew that India was capable of expansion and growth. His clarion call to the nation was: "Awake, arise, and stop not till the goal is reached."

Swami Vivekananda's biography has been reproduced from Swami Sivananda's
"Yoga Lessons for Children (Vol. 7)", published by the Divine Life Society of South Africa.