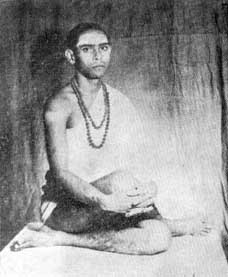 Born on the 31st of December, 1927, he was known as Kuttan Nair. He hails from Kerala, where he had his school education. After completing school, he was engaged in teaching for sometime, after which he joined the Indian Army. While searching for a misplaced paper, he happened to lay his hand on a pamphlet entitled ‘Sadhana Tattwa’ by Swami Sivananda. The practical instructions in that pamphlet attracted him to Sivananda. He took leave, went to Rishikesh and had Darshan of Swamiji. Subsequently he visited the Ashram a few times and finally when he came to the Ashram in 1947 to attend the Diamond Jubilee of Swami Sivananda, the Master told him, "Stay here," and he stayed. The Master initiated him into the holy order of Sannyasa, on the sacred Mahasivaratri, in February 1949, and gave him the name Swami Vishnudevananda.

When he entered the Ashram he was specially interested in the Hatha Yoga techniques, knowledge of which he brought with him even when he came from Kerala. The Master, knowing his abilities, made him the Professor of Hatha Yoga in the Forest Academy of the Ashram which was the only work he did for several years. It was during a period of absence from the Headquarters of Swami Madhavananda, the Secretary, that Sri Gurudev nominated Swami Vishnudevananda as the Secretary of the Ashram, sometime in the year 1955-56. During those very hard days when the financial strength of the Ashram was not much, Swami Vishnudevananda worked hard not merely as a managing Secretary but took immense interest in seeing to it that a temple is built in the name of Sri Gurudev, called Sri Guru Mandir. He had to struggle hard to achieve this purpose which of course he completed. In the year 1957, devotees who were attached to him due to the teaching they got through him got interested in him to such an extent that they invited him to countries outside, which invitation he accepted with the permission of Sri Gurudev and went to Malaysia, Hong Kong and Japan and from Japan he went to America fixing his permanent Centre in Montreal, in Canada. He opened other Centres in the United States and also several other Yoga Centres in Europe.

Today Swami Vishnudevananda is a very well-known name and his work is of international reputation and very few in the field of Yoga in the world would be unacquainted with the name of Swami Vishnudevananda. He has also a Centre in India in Nayyardam near Trivandrum, South India. Swami Vishnudevananda is a very simple man, though, like a magician, he worked a miracle in the West, where tirelessly he worked to bring together many complex elements, group of devotees and participants in his work. He maintained a simplicity of his own and almost not caring for himself, only caring for the welfare of his mission and his devotees. He lives the life of a desireless, unselfish and simple man, working very hard vigorously for sometime and completely severing himself from work at other times and rushing back to the Himalayan peaks, Uttarakashi and Gangottari often times for retreat and personal prayer and meditation. He has taken several rounds of trip through the world and through India in the name of Sri Gurudev and it is a great praiseworthy quality of his that even after earning such a reputation as a Yoga Teacher throughout the world, even today he considers himself as the humble servant of the great master Swami Sivananda and never does he forget to mention the name of the Master when he speaks whether in Satsangas, retreats, seminars or conferences. He is an extremely good person, simple to the core, very hard working and immensely devoted to the name of Sri Gurudev and his Mission.