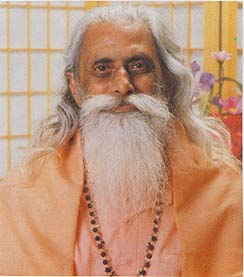 A saint is generally said to have no pre-saint life. Once a person takes Sanyasa, he gives up all his earlier relationships, ‘burns’ as it were, all his previous samskaras (impressions) and that is the day of his new birth. However, it is difficult for even a sanyasin to renounce completely all his earlier samskaras, and it is equally the nagging curiosity of all his devotees. Since I happen to know something about the early days of Swami Premanandji Maharaj, the task of piecing together my reminiscences about him has been given to me.

As a child he lived in a sprawling house at Balrampur where he was born. The house had two main divisions—inner and outer courtyards. The inner compound itself was so large that there were many trees, including a BEL tree with a low platform around. Near by the house was a graveyard and not faraway a cremation ground close to a small rivulet. This boy would often sit with closed eyes under the bel tree for long periods. As a student at the Balrampur school, he would often slip away with his books at the graveyard, or near the burning ghats. A large number of sadhus and wandering mendicants used to visit the house. The behaviour of the child was reported to them. One of them looked at him intently and said that this boy was a saint in his two previous lives. This remark, I am told, was later reiterated by the Most Revered Gurudev Swami Sivanandji Maharaj.

Premananda Ji was born as Mahabir Prasad Saxena s/o Shri Shivprasadji and Smt Parvati at Balrampur on 7th May 1920 at about 4 a.m., in Brahma Muhurta. His father had lost several children in infancy and was worried that this boy might meet the same fate. He went to various saints and peers to seek their benedictions. One muslim peer relented and said the boy shall survive but the father will have to make a sacrifice. Shivprasadji agreed, and within a few days of the birth of the boy, his wife passed away. He was closely related to my maternal uncle, Munshi Kanhaiyalalji, whose wife took charge of the infant and they adopted the child as their own. After sometime the father also expired and Mahabir was reared by them as their own son along with their daughter, Sushita, who was born a few years later. About 10 km from Balrampur was a Buddhist pilgrimage of Seht Mehet. Mahabir was very fond of visiting that place and spent quite some time there all alone.

Mahabir did well at school, and at college. My grandfather, Shri Gopal Sahai, was the diwan (Prime Minister) of the Balrampur Maharaja. My maternal uncle enjoyed great respect and by dint of his honest, truthful character occupied very responsible positions in the Raj. After doing his intermediate—(now we have 10+2+3)—Mahabir joined the Survey of India and later was selected as Naib Tehsildar (revenue official). At Balrampur he never missed the satsang at the place of Lala Babu which used to begin at 4 in the morning. It was here that he met Swami Sharnanandaji Maharaj and came under his spell. Shri Trimbakeshwarlal Srivastava of Balrampur was a great devotee and had much influence in shaping the devotional propensities of young Mahabir.

When war broke he joined the Army in 1943 as havildar and by the time he left Army in 1952 he had risen to the rank of Non-Gazetted Officer. Back in Balrampur he was re-appointed as Naib Tehsildar and joined his first duty at tahsil—Tarasbganj in district Gonda, not far from Balrampur. It was during his army days; when he was posted at Delhi—when we came into closer contact with him as myself and my younger brother Balbir Sahai, used to go to Ramakrishna mission every Sunday, regularly.

Mahabir would join us invariably. There we came in close contact with a number of saints. As my mother was ordained by the President Maharaj of the then Ramakrishna Mission at Belurmath, the mission saints had a soft corner for us and Swami Manglanandaji Maharaj was a frequent visitor to our place. Those days Swami Ranganathanand Ji Maharaj used to hold lectures on Srimad Bhagawatgita. He would sit motionless like a statue and sloka by sloka explain lucidly the hidden meaning and philosophical import of each, lacing his discourses with suitable quotations from the latest books on western philosophy. To listen to his talks was a remarkable experience and left an indelible impression upon us all and Mahabir must have imbibed a good philosophical grounding at that time. I had two volumes on Swami Ramtirtha, entitled, In the wood of God Realisation, published by Ganeshan & Co, Madras. The books contained the lectures by the great Swami in America and elsewhere. Mahabir lapped up both the volumes which made a deep impression on his mind. Similarly, he studied the works of Swami Vivekananda and Swami Sivanandaji Maharaj.

After his army days, Mahabir returned to Balrampur where thanks to his service in Armed Forces during the war, he was straightaway offered Naib-Tehsildar and soon was promoted as Tehsildar. His meticulous planning, relentless application and superb efficiency in whatever he does, I think has much to do with his military training. I had also returned to Balrampur when he was there and we again had good interaction. A number of saints used to visit our house regularly. Among them, the most important was Swami Palak Nidhiji Maharaj—‘pathik’. He was a poet of sorts and ‘pathik’ was his pseudoname. He would ask my brother, and Mahabir who has a mellifluous voice, to sing popular Film Songs. That rather astounded us but very soon we were able to divine the secret. He gave the collection of his poems, all in praise of the Lord, mentioning in bracket on the top ‘to be sung after the song..., from....film.’ That is how his prayers became very popular and were sung in many houses. We still have a few books of his poems.

Pathikji at that time was a charming young man, his black beard creating a pleasant contrast with his fair complexion. He used to hold satsang every evening beginning at 6 p.m. sharp at a school hall. At 6.05 the doors of the hall would be closed to late comers. He would begin by singing a few bhajans and then start his discourses. After the talk he would ask the audience to sit silently for five minutes and mull over whatever he had spoken. After that he would invite questions and answer them. It was really a very scientific method to ensure that the listeners picked up something from his discourses. He stayed on for as long as three months and myself and my brothers, i.e. Balbir and Mahabir, did not miss a single lecture. It was indeed a soul stirring spiritual experience and we shall never forget Swami Palaknidhi Maharaj.

After sometime I returned to Delhi and joined Government service. One fine morning Mamaji rang me up to say that Mahabir has disappeared. We contacted various saints and visited several Ashrams but he was nowhere to be found. The search continued and the suspense deepened when perhaps after six long years Mamaji dropped in and revealed Mahabir had been found. One Mr. H.D. Sharma of Delhi had informed him that he was then known as Swami Premanandji and could be found at that time at Gurgaon. We both made a beeline to Gurgaon. As we got down from the bus the music of some well-sung part of Tulsikrit Ramayana wafted over the loudspeaker and greeted our ears. Mamaji at once said, yeh Mahabir ki awaz hai (this is the voice of Mahabir).

I couldn’t agree with him less. Guided by the music we soon reached the congregation and sat down. After the pravachan (commentary), the devotees lined up for prasad being distributed by Swami Premanandji Maharaj. The que moved forward slowly till our turn came, and he was as much surprised to see us as we were pleasantly flabbergasted. 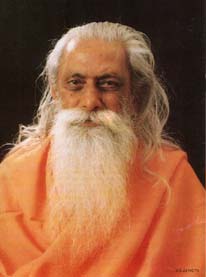 Click on the image to view a larger image

A LITTLE MORE ABOUT SWAMIJI AFTER SANNYAS

Swami Premananda was working as an officer in the revenue department of the Government, and he used to visit the Ashram. Later on he relinquished this job on a call from the spiritual ideal of life, in pursuit of which he came to the Ashram of Sri Gurudev, sometime in 1957. Sri Gurudev found him to be a very honest worker, having been already acquainted with managemental and administrative work as a revenue official. He was primarily, at the beginning, entrusted with looking to the Branches of the Divine Life Society through its office at the Headquarters, which work he did to the satisfaction of Sri Gurudev. He fell ill later on. He had an acute attack of Malaria which partially rendered him deaf, by the intake of Quinine, and in that connection to take rest he went from the Ashram to some place in Rajasthan where devotees finding him a very simple and amiable person requested him to continue to stay there for a long time and start a little Centre of the Divine Life Society. This nucleus of Sri Gurudev’s work in Rajasthan spread itself in different places especially in the Punjab where he became quite known to people there due to his discourses an the Ramacharita Manas of Sri Tulsidas, and spiritual messages that he gave to people together with his personal touch which began to make devotees feel that his presence has a healing touch to families and individuals who had difficulties and problem of one type or the other. For many years, Swami Premananda lived outside the Headquarters of the Ashram, carrying on this work of spreading spiritual messages, though visiting the Ashram almost annually. Once when he came to the Ashram on a visit, he was requested by Swamijis in the Ashram to settle down here and to render some service at the headquarters, which he graciously accepted and is rendering till this day.