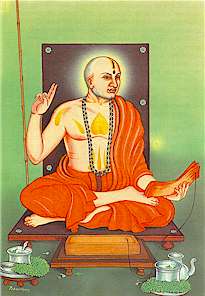 Madhvacharya was a great religious reformer and an orthodox commentator on the Brahma Sutras and the ten Upanishads. He was born in 1199 A.D. at Velali, a few miles from Udipi in the district of South Kanara in South India. He was a Tulu Brahmin by birth. He was born of Madhya Geha and Vedavati. Vedavati was a virtuous woman. Madhva is regarded as an incarnation of Vayu, the Wind-God. The father gave him the name Vasudeva.

Madhva distinguished himself in physical exercises and field games. He had a wonderful physique. He could wrestle, run, jump and swim. So people gave him the nickname Bhima. Madhva took to the study of the Vedas and the Vedangas and became well-versed in them. He took Sannyasa in his twenty-fifth year. Achyutaprakashacharya initiated him. Madhva was now known by the name Purna Prajna. Achyutaprakashacharya found that Madhva was a brilliant Sannyasin with efficient knowledge in Vedanta and other scriptures. He put Madhva as head of the Mutt in his place. Madhva received the name of Ananda Tirtha now. He went on an extensive tour in Southern and Northern India to preach his gospel of Bhakti. He made several converts. He went to Badrinarayan, and soon after his return, he wrote his commentary on the Bhagavad Gita and the Vedanta Sutras. He built several temples at Udipi, the principal centre of the Madhva sect. Most of the orthodox Madhvas try to go to Udipi at least once in their life.

Madhva had superhuman powers. He performed many miracles. He saved a boat which was caught in a storm. A boat which contained an image of Lord Krishna capsized. Madhva brought back the image from the ocean. During his tour, king Ishvara Deva in Maharashtra asked Madhva to work in building a dam. Madhva noticed that he had been unconsciously working for the king the whole day. Once he stilled the waves of the ocean when he went to take bath.

Madhvacharya is the great exponent of the Dvaita school of philosophy. His Vaishnavism is called Sad-Vaishnavism in order to distinguish it from the Sri-Vaishnavism of Ramanujacharya. According to his philosophy, the Supreme Being is Vishnu or Narayana. Every follower of the Madhva school should have a firm belief in the Pancha-bheda—five real and eternal distinctions—viz., the distinction between the Supreme Being and the individual soul, between spirit and matter, between one Jiva and another Jiva, between the Jiva and matter, between one piece of matter and another. The phenomenal world is real and eternal. The worship of Vishnu consists in (i) Ankana, marking the body with His symbols, (ii) Namakarana, giving the names of the Lord to children and (iii) Bhajana, singing His glories. Madhva laid much stress on constant practice of the remembrance of God (Smarana). He says, "Form a strong habit of remembering God. Then only it will be easy for you to remember Him at the moment of death". Madhva pointed out that when the Lord incarnated, no Prakrita Deha or material body was put on by Him. He prescribed a rigorous kind of fasting to his followers.

Renunciation, devotion and direct cognition of the Lord through meditation lead to the attainment of salvation. The aspirant should equip himself with the study of the Vedas, control of the senses, dispassion and perfect self-surrender, if he wants to have the vision of the Lord. These are some of the important teachings of Madhvacharya, the renowned exponent of the dualistic school of philosophy.