This article is excerpted from the book: Lord Shanmukha and His Worship
and a pamphlet published by The Divine Life Society of Malaysia. 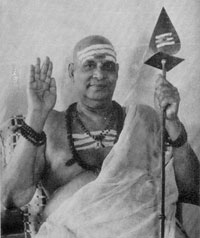 Thaipusam which falls in the month of Thai (January - February) is celebrated with intense devotion by a very large section of the people throughout Malaysia. It is celebrated on the full moon when the constellation Pusam is on the ascend. Lord Skanda is the spiritual son of Lord Siva. On this day the Lance (vel) was given to him by His mother.

The origin of Lord Skanda, the purpose of His avatara and its significance are of much importance to all seekers after Truth. During the battle between the Asuras and the Devas, the latter were defeated several times by the former. The Devas were unable to resist the onslaught of the Asuric forces. In despair, they approached Lord Siva and entreated to give them an able leader under whose heroic leadership they might obtain victory over the Asuras. They surrendered themselves completely and prayed to Lord Siva sincerely. The gracious Lord granted their request by creating mighty divine warrior, Lord Skanda, out of his own power or Achintya Sakti. This great son of Lord Siva at once assumed leadership of the celestial forces, originated them, inspired them and attacked the asuric forces. The asuras were routed and a glorious victory was gained by the Devas.

Make a whole hearted surrender at the feet of the Divine even as the Devas surrendered to Lord Siva. And like them, pray earnestly with Bhava and sincerity. The Divine help will surely come, and in your heart will spring up the routing torrent of Divine Sakti. The Lord's grace will become manifest to you in the form of inner soul force. This is the Divine power of Jnana symbolised by the Vel which vanquishes all undivine forces that attack you on the spiritual path and emerge triumphant and victorious.

Kavadi—The Symbol of Tapasya And Courage

Lord Shanmukha is the Pratyaksha Devata (visible God) of this Kali Yuga. He is readily pleased with His devotees to whom He grants both Bhukti and Mukti (enjoyments here and Moksha hereafter). Millions are still living who can narrate instances in their own lives to show the miracles brought about by propitiation of Lord Shanmukha.

Perhaps the most potent propitiatory rite that a devotee of Shanmukha undertakes to perform is what is known as the Kavadi. The benefits that the devotee gains from offering a Kavadi to the Lord are a millionfold greater than the little bit of pain that the devotee inflicts upon himself.

Generally people take a vow to offer a Kavadi to the Lord for the purpose of tiding over or averting a great calamity. For instance, if the devotee’s only son is laid up with a fatal disease, he would pray to Shanmukha to grant the boy a lease of life in return for which the devotee would take a vow to dedicate a Kavadi to Him.

Though this might, on the face of it, appear materialistic, a moment’s reflection will reveal that it contains in it the seed for the Supreme God-Love. The worldly object is achieved; and the devotee offers the Kavadi. After the ceremony, he gets so much intoxicated with the love of God that his spiritual, inner chamber is opened now. This, too, ultimately leads to Para Bhakti.

From the simple shape of a weighing balance, or the street hawker’s storehouse—a heavy wooden stick to rest on the shoulder, to the two ends of which are tied two baskets enclosed in cloth—the Kavadi varies in its shape and type to the costly palanquin superstructure, profusely flower-bedecked and interwoven with peacock feathers (a feather that is of very great significance in Shanmukha worship). In all cases the Kavadi has a good many brass bells adorning it and announcing it as the Kavadi-bearer moves along. As, very often, the Kavadi-bearer observes Mouna or the vow of silence, the bell alone is eloquent of the Kavadi-procession.

Now, the two pots hanging at either end of the Kavadi might contain rice, milk or other articles which the devotee has vowed to offer to Lord Shanmukha. The more devout among the Kavadi-bearers and especially those who offer the Kavadi to the Lord as a measure of propitiating the Lord for spiritual development, as a part of their Sadhana, collect these articles by begging. On foot they travel from village to village, and beg from house to house. The people offer the articles direct into the pots of the Kavadi. The Kavadi-bearer continues this way till the pots are full or until the avowed quantity is reached and then offers the Kavadi to the Lord. Sometimes the devotee takes the vow that he would walk barefooted from his home to one of the shrines of Lord Shanmukha, bearing the Kavadi and collecting the materials for the offering. He has sometimes to walk nearly one hundred miles! Those who offer milk, rice or any article into this Kavadi also receive the Lord’s blessings.

The Kavadi-bearer has to observe various Niyamas (rules) between the time he takes up the Kavadi and the day of offering. He has to perform elaborate ceremonies at the time of assuming the Kavadi and at the time of offering it to the Lord. He also puts on the dress of a Pandaaram—or Saivite mendicant. It consists of a saffron-coloured cloth, a scarlet conical cap and a cane silver capped on both ends. Lord Siva Himself is a Supreme Pandaaram. He Himself loves to wander in this dress. Therefore the dress is holy for the Saivite. The Pandaaram has to live on Bhiksha (alms) only. The Kavadi-bearer’s bare chest is covered over with several Rudraksha-malas.

The Kavadi-bearer observes celibacy. He takes Sattvic food; and abstains from all sorts of intoxicating drinks and drugs. He continuously dwells in the thought of the Lord.

Many of the Kavadi-bearers, especially those who do it as Sadhana, impose various sorts of self-torture upon themselves. They pass a sharp, little ‘Vel’ (Shanmukha’s Spear) through their tongue which is made to protrude out of the mouth. Or, they pass a ‘Vel’ through the cheeks. This sort of piercing is done on other parts of the body also. This is indeed a great Vrata, equal in merit to Chandrayana and Krichhra Vratas.

The Kavadi-bearer does not shave himself; he grows beard. He eats only once a day.

The ‘Vel’ pierced through his tongue or cheeks reminds him constantly of Lord Shanmukha; it prevents him from speaking. It gives him great power of endurance.

In all cases, the Kavadi procession terminates in an elaborate, colourful and inspiring ceremony. The priests chant various hymns in praise of Lord Shanmukha. Incense is burnt. Drums are beaten. Musical instruments are played. The devotee himself is in a high state of religious fervour. He dances in ecstasy. His very appearance is awe-inspiring; there is Divya Tejas on his face. Devotees often experience Bhava Samadhi; or they get Shanmukha-Avesha when the Deity enters their body and possesses him for some time.

This is the most difficult Kaavadi-offering. With the Kavadi hanging on his shoulders the devotee walks through a pit of coals of fire. Hymns are sung in praise of the Lord all around the pit. Drums are beaten. Incense is burnt. The entire atmosphere is awe-inspiring. The real devotee gets into a state of ecstasy and easily walks over the fire.

The Glory of Kavadi:

As a Sadhana, Kavadi is a beautiful synthesis of Bhakti-Hatha-Raja Yogas. The devotee, especially if he is not already a Bhikshu or monk, is made to beg from door to door often in known and also in unknown villages. Sincere Bhaktas readily offer the Bhiksha; there are those who would drive him away also. The devotee thus gets the chances of crushing and powdering his ego and developing mental power of endurance. For His sake he is prepared to undergo any privation and humiliation. The wandering Parivrajaka life gives him an inkling of the magnitude of human suffering and steels his heart to resist the allurements of the flesh. Pure Sattvic diet adds to the Sattvic content of his mind. Celibacy strengthens his will and clarifies his understanding. The not-very-good appearance in which he roams about convinces him that appearances are deceptive and kindles Viveka in him. The aspirant learns the glory of Mauna also. Above all, constant remembrance of the Lord intensifies his devotion to Him every minute.

Those who offer the Kavadi to the Lord for spiritual progress soon attain Him. Those who do so for the purpose of achieving some earthly things soon acquire Shanmukha-Bhakti which in time flowers into Maha Bhava leading to Sayujya (union) with Lord Shanmukha.

Lord Shanmukha, the Commander-in-Chief of the Devas, the Almighty Son of Lord Siva, is easily propitiated through this Kavadi-offering which calls for endurance, courage and one-pointed devotion to Him. He who goes through the austerity of Kavadi-offering is surely a Dheera or hero. Such Dheeras are the beloved of Lord Shanmukha Who showers His choicest blessings on them, bestows on them the inner eye of intuition and draws them unto Himself.

Glory to Kavadi which is the symbol of Shanmukha Bhakti! Glory to the Kavadi-bearers! Glory to Lord Shanmukha!