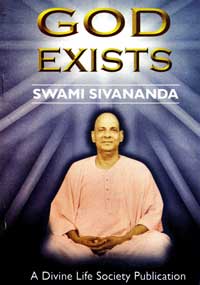 Doubt in the very existence of God has been raised in the mind of the common man, by the evil-doers for fulfilling their nefarious ends. The modern atheist has his omnipotent and omniscient scientific research laboratory; and that whose existence cannot be proved there does not exist!

Once this faith in the existence of God is shaken, man loses his moorings and is thrown at the mercy of all kinds of evil forces, within and without.

Sage Sivananda has proclaimed the existence of God and the soul-force behind his Word has awakened the faith in millions of people all over the world. He has brought forth interesting illustrations and illuminating logic to support his declaration, to convince even a confirmed atheist of the existence of God. They have all been brought together in this volume which is a boon to the spiritual propagandist, the teacher, and people all over the world--the believers and the non-believers.

God Exists, So What?

Deep reflection over what I have said in this book would convince even a confirmed atheist that God exists.
"Yes, I believe God exists," you say: "What should I do about it?"
Endeavour to realise Him.
He must be more real to you than all the objects of the world.
For that you must serve humanity and love God. Meditate on Him in Brahmamuhurta.
Sing Kirtan.
Do Japa.
Lead a virtuous life, for He is the witness of all your thoughts, words and deeds.
Be truthful; cheat not anybody.
Love all; harm not anybody.
Be kind to all; for God dwells in all. And, thus realise Him here and now.
May God bless you!