SIVANANDA:
HIS MISSION AND MESSAGE 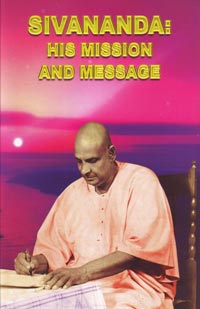 Dedicated
To the World-Teacher
Who said
That
To raise the fallen,
To lead the blind,
To share what he had with others,
To bring solace to the afflicted,
To cheer up the suffering,
and
To serve God in all humanity,
Was his lifeĺs mission.

The present work owes its origin to the Souvenir Number of The Divine Life, published in commemoration of Sri Swami Sivanandajiĺs sixty-sixth birthday in September 1952. A large number of contributions were received from far and near, of which only a few could be incorporated in the journal. The rest are presented herein.

This publication is more or less a record of the various shades of opinion expressed by His Holinessĺ disciples, admirers and associates, eminent and common. Here indeed is a study of the Master from different angles of estimation, some extraordinarily devout and ardent, while some others quite reticent and mellow.

The life story of a saint who has dedicated himself to the service of humanity rising above self-centred ambitions and tumults of earthly passions and pairs, is a perennial font of glorious inspiration, optimism and courage to the entire humanity. Thus the purpose of this compilation is amply clear.

No literary portraiture is complete unless it contains the enlivening touch of the subject himself. It is, therefore, quite a good many contributions from the pen of Sri Swami Sivanandaji have also been incorporated herein.

They will provide the reader with a first-hand knowledge of his teachings and speak for themselves his lifeĺs mission.

OM. Prostration to Brahma and others, the great Gurus, the givers of knowledge of Brahman, through tradition [i.e., the line of Guru-Sishya Parampara], the Rishis of [our] line. I am that Brahman Itself, the Internal Substance, the Mass of Consciousness, free from all faults.

I prostrate myself to Lord Narayana, Brahma, Vasishtha, Shakti, his son Parashara, Vyasa, Shuka, Gaudapada, Govindapada, his disciple Sri Shankaracharya, his disciples Padmapadacharya, Hastamalaka, Trotaka, Sureshwaracharya, the commentator, and all other Brahmavidya Gurus.

I salute Sri Shankara Bhagavatpada, the bestower of peace and auspiciousness to the world at large, the ocean of mercy, and the seat of all learning inculcated in the Shruti, Smriti and Puranas.

I adore, again and again, the Lord Siva who is Shankaracharya and the Lord Vishnu who is Badarayana [Bhagavan Vyasa], who wrote the Sutras [Vedanta] and the commentaries.

I prostrate myself to Dakshinamurti who manifests himself in three different forms as God, Preceptor and Self, and whose body is all-pervading like the sky.

Ode to the Master

1. I worship the unique Sage, who is pure both internally and externally, who has cast all self-interests to the winds with a laughter, whose body is as lustrous as gold, whose face resembles the full moon (whose mouth contains beautiful lores) and who renders significant, the name of Lord Siva, bestowing blessedness on the universe.

2. Recognizing him quickly as the Lord, consort of Parvati coming in another guise and remembering His power (penance) which had burnt down his own body, cupid ran away in fright and is now hiding himself in the ocean.

3. The intoxicated bees, peacocks and male-cuckoos sing sweetly on the forest trees, being taught, as it were, by this wise leader of ascetics, who sings the praise of the Moon-crested Lord, the causeless friend of all.

4. Pleasant winds possessed of the three qualities blow always in the hallowed Anandakutir in order to comfort the Great World Teacher, who looks upon all beings alike and who brings solace to the entire world.

5. Having attained tranquillity from the Master who has attained the spiritual purity of the heart and who is ever tranquil, inborn enemies like the elephant and the lion, live happily with great mutual friendliness, as they are drawn by the special virtue of his company in the regions of the penance-grove.

6. The entire world has now become obedient to the great Sage without the help of the valour of massive-arms, on account of his teaching, righteous conduct (Dharma) and the Yoga of Synthesis and his loving the people as the Lord Himself.

7. In him, who is a great hero that has conquered the internal enemies, shines the creeper of learning which yields all desires, destroys sufferings, is bright with exceptional effulgence and hence flourishes by making the life of human beings worthwhile through the removal of their blindness, as does a sharp sword in the hands of a great hero who has subdued his foes. (The adjectives are common to learning and sword).

8. I Pray at heart to the Master, who is in the state of Sahaja Samadhi and who teaches us thusŚ"One who desires to progress along the path of spirituality that is resorted to by great men, should eschew ego and mineness and do deep discrimination as "Who am I ?"

9. I take refuge in Master Siva, who is ever performing his favourite sacrifice at the altar of the intellect of man with the sacred fire of knowledge burning bright with the oblations of the Upanishads and with the aid of a number of sacrificing priests in the form of excellent books.

10. Our Master nourishes supreme, having established his Ashram which is beneficial to the entire mankind, in the Abode of Sages called Rishikesh on the slopes of the Himalayas containing rarest gems inside, where many a sage had practised severe austerities.

11. Many a wise man, intent on finding out the Truth, wanders far and wide and comes at last by good fortune to the presence of Siva and crosses both sorrow and ignorance, the cause of mundane existence, in such a manner that there is no question of falling back again.

12. Should any person, whosoever he might be approach the Master but once with devotion, with the words, "Instruct me thy disciple", he would soon attain the Supreme Brahman, with all the dirt of his Bins dried up by his holy glances, for, our Master is a performer of such miracles!

13. May this "Nosegay of Twelve Verses to the Master" of mine offered with a devout heart on this occasion of the Masterĺs Birthday Festivities, lead to my spiritual beatitude by His grace!

Saviour of Our Age

The Gita assures us that the Supreme Lord manifests Himself in the darkest hour of crisis when the evil forces of falsehood and injustice have their complete sway over truth and justice. To dispel the darkness of Adharma He had manifested Himself as Sri Rama in Treta Yuga and as Sri Krishna in Dwapara Yuga. As saviours like Buddha and Christ He had appeared to bring into the fold of Dharma large masses of humanity. Sometimes these manifestations had the fullest expression of the Supreme Divinity, and sometimes there had been partial manifestations, which we call Poornavatara and Amsavatara, respectively.

Who does not know Swami Sivanandaji, the well-known seer of our age, who for the past so many years have been serving the great cause of the dissemination of spiritual knowledge all over the world? Having realised the Highest Truth through Karma, Bhakti and Jnana Margas, he is now always immersed in Adhyatmic Bhava and is ever engaged in selfless service of the suffering humanity. There is in him not a tinge of contempt, disregard or indifference towards any religion, any method of worship or any philosophy. In all faiths and beliefs he beholds the spirit, of oneness and advises others to look only to the essentials and disregard the non-essentials which may come in conflict with each other.

Swamiji preaches the Yoga of Synthesis, which alone can assure a harmonious development of the human personality. For the dissemination of spiritual knowledge he has published nearly two hundred books dealing practically on every aspect of religion, philosophy, ethics and medicine. The number of free literature distributed by him spontaneously in all parts of the world is inestimable. Suffice it to say that the audited reports of the accounts of his Ashrama show that books worth sixty to sixty-five thousands of rupees are distributed free every year.

The Sivanandashram serves the sick and the afflicted through an allopathic free hospital, an Ayurvedic Pharmacy and a homeopathic clinic as well. Numerous Sadhus and Daridranarayanas are everyday fed at the Annakshetra. Poor students are educated free with lodging and boarding facilities. There are many such activities directed by Sri Swamiji towards the service of humanity. The branches of the Divine Life Society in nearly all parts of the world are also following a similar routine of selfless service. Countless students are trained in different branches of Yoga. The spirit of Nishkamya Seva is always the driving force of all these activities.

I consider Sri Swami Sivanandaji Maharaj as a saviour of our age, a Poorna Avatara of the Lord. May His teachings spread in every village, town and city in all parts of the world.